I’m slightly embarrassed to admit that I hadn’t realised I’d been to this pub before when I rediscovered it on one of my wanders. It’s slap bang in the middle of a very residential street which leads up to one of the major entrances to Victoria Park. Set back a little from the road it sort of leaps out at you unexpectedly when you pass it, not in the unwelcome way that a mugger or murderer might, it leaps out like an over exuberant drunk uncle making a crap attempt at a joke; well meaning but not really very funny. Pubs aren’t meant to be funny though so it’s fine that this surprise pub doesn’t make you laugh; it might get you drunk though.

If you were assessing this pub simply based on what comes out of the pumps you’d be forgiven for thinking it’d been taken over by ze Germans. Roughly half of the beer here is from Germany or Austria whilst the other is constituted from more pedestrian fare; mainly Fuller’s. The end result of this is a very satisfying expanse of beer options though it is perhaps strangely at odds with the WWII themed artwork that graces some of the wall space.

In terms of the space this is a great place to be. It’s roomy and light with great big windows in the front where the bar is so it avoids ever feeling grim and claustrophobic; this main room is complemented by a more intimate seating area running off down the side. An open coal fire, tended by one of the friendly local drunks (who were pissed by 2 on a Saturday), lends a glow to the place in the winter. In the Summer it’s size and openness means that it doesn’t become a suffocating sweat closet.

A massive chalk board announces a distinctly uncomplicated menu which for the most part isn’t too expensive. £4.50 for a bowl of chips however did lead me to squirt beer out of my nose and back into my pint; I still drank it though as that had cost me just under a fiver itself. Out at the front is a rather smart ‘beer garden’ which although lacking in anything particularly plant like does have an awning, ample benches and those ineffectual glowing lamp heater things so you can sit outside in relative comfort whatever the season.

I really like The Approach Tavern. It’s back to basics pub with just enough charm and character to set it a cut above some rivals with similar attributes. Be it for a few Sunday afternoon pints or a gathering in the evening I’ve no doubt that this will be a hit. Just don’t mention the war. 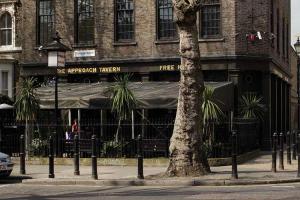