One of the main things people prattle on about in reference to London is that it’s expensive; especially so when it comes to property and land. It’s getting to the point where a shoe box that’s been left on a street corner in Kensington will be marketed by estate agents with a greater market value than a three bedroom semi in Milton Keynes. Subsequently you tend to find that everything is a bit shoved together, making use of every sad inch, building ever nearer and higher to the point that we’re all going to be walking in single file down incredibly narrow pavements, staring into our digital rectangles, shuffling about in silence and waiting for the inevitable day where we die and are wedged into a cemetery plot so full they may as well have just thrown you in the corner to be eaten by stray cats.

Fortunately things aren’t quite that bad yet (I give it ten years) so there is still the odd place where you can enjoy the outside with a pint. East London is especially devoid of beer gardens and those that I’ve been previously aware of barely qualify given that they lack anything remotely green or growing (unless you count all the beards on the numerous hipsters *chortle*) see The Owl and Pussy Cat or The Well and Bucket for the best examples of these soulless grey beer yards. The Crown and Shuttle however is hiding something of a wonder; with benches aplenty, table candles, pot plants, creeping vines, retro signs and all the other trappings of a boozy oasis. This is the Rivendell of East End beer gardens.

So the beer garden is pretty special but what else? Well in said beer garden is a food truck (told you it was big) which is pumping out the ever popular array of Shoreditch classics which include pulled pork, aioli, sourdough etc. It’s good nosh, well priced, generously portioned and it stops just short of becoming a menu for bell ends (see The Draft House or The Blue Posts for pubs which failed spectacularly).

The pub bit of the pub makes it a pretty good pub too and its doing all the pub things that a pub should. Plenty of nice places to sit, exceptional range of draft beers and ales, eclectic tunes being played at a not too intrusive volume and staff who are happy to let you taste a beer before you decide on what you want to invest the best part of a tenner in enjoying. All these plus points weigh in to take the Crown and Shuttle well up the rankings of excellent East End Boozers we’ve visited.

There are a few minor niggles though which are worth noting though should certainly not stop you visiting. The main issue I have is highlighted by the fact that bouncers are on the doors from early evening and though I myself have had nothing but tranquil pints here it’s not hard to imagine, given its proximity to the city, that it attracts the odd cloud of pillocks intent on ruining the lives of the proletariat with their wooping, guffaws and general twattishness. The other thing to note is that oddly the Crown doesn’t let dogs in after a certain (undefined) time which caused my first attempt to come and review it to be thwarted and led to me exclaiming (not altogether soberly) ‘Do you know who I am?’ to a bouncer. He didn’t, doesn’t and almost certainly never will. If you can cope with these two very trivial problems then you should get yourself down here post haste. 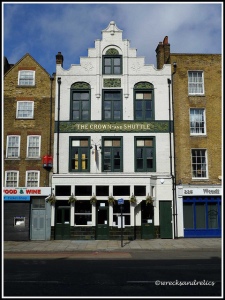 One response to “The Crown and Shuttle E1 6JE (Tube: Shoreditch High Street)”