The streets that sprawl their way off Pentonville Road are for the most part lacking in glamour; most lead to dilapidated council estates or along roads lined with social housing which has had far too little love or attention of late. Northdown Street is no exception to this but it does play host to a small establishment named for the ignominious King Charles I. I’m also led to believe that there is a ‘knocking shop’ on the street too but I’ll pass on reviewing that.

Small (or cosy if you’re an estate agent), homely and traditional are all good fits to describe this hidden away pub. It consists of one wood panelled room which bows delicately with the bar and is heavy with the atmosphere of a pub which has a history.  The walls are curiously decorated with a mixture of severed animal heads and tribal masks; it probably wouldn’t be too tough to perform a voodoo ritual on the billiard table given the items on hand but I wouldn’t recommend it.

Local brewery Brodies make a strong appearance at the pumps as well as some treats from further afield. Nottingham’s ‘Ye Olde Trip’ has been on offer on my last few trips and it’s highly recommended. If you’re looking for something with a little more kick then there are a notable number of malt whiskeys here too.

Sadly I fear that this traditional pub is let down by its locale more than anything. The optimistic benches outside only really enable you to hear the traffic more clearly and glimpse the occasional chap in a long mac heading into the door of a house with permanently closed curtains. In the evening the sun has long since left the front of the pub so even these dubious pastimes are to be enjoyed in the shade, ruling it out as a viable destination for post work pints in the summer. There is also a palpable feeling that this is still very much a local pub and you don’t quite fit. 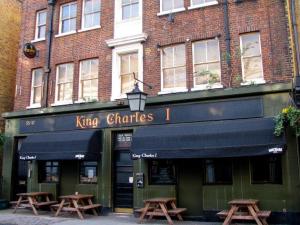