When the phrase ‘batshit crazy’ was coined it’s originator probably didn’t realise that there was a pub in London to which it was fitted like a well tailored suit made out of leopard print spandex. Parked on Hackney Road a stones throw from Shoreditch High Street and Old Street stations this place features a clientele which are the distilled essence of East London trendy, hipster, lens less glasses wearing, nose ring sporting, skinny jean toting, soap allergic, backcombed, platform shoed bell ends. I like it.

However I don’t like it because I fit into those categories, I like it because it doesn’t give a shit about how mad it is. Examining the walls will reveal an array of kitch paraphernalia the highlight of which is a moose’s head which for some inexplicable reason has animatronics inserted into its head to make it move its eyes and mouth.

Apart from the fact that it serves Frulli (which is a guilty pleasure of mine) there really isn’t anything to drink here that makes it worth the trip. If you go in an evening though you won’t leave disappointed as the experience of being there more than makes up for its lack of proper beer. Lucky visitors might even witness the ballroom dancing transvestite troupe who occasionally dominate the limited standing room with their ‘display’.

Technically speaking this is actually a gay venue but it’s not really relevant as the cross section of punters is incredible and you’d fit in regardless. I’m tempted to put this down as an ‘Epic’ pub but I have to accept that it’s not to everyone’s tastes so ‘Give it a Shot’ you might like it. Incidentally that’s also my best chat up line. 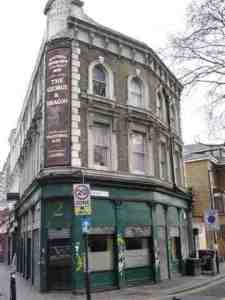