Sometimes on this round wet ball that we call Earth, two things combine together to form a little slice of perfection – fish and chips, frosty mornings and clear blue skies, the Manchester United strike partnership of Andy Cole and Dwight Yorke in 1998-1999.

Every ying has its yang, however, and there are just as many examples of things that don’t click – and sadly, the physical form of the Kings Head, Stamford and the vibe/ambience/atmosphere of the King’s Head, Stamford.

For my money this is the second nicest inside of a pub in Stamford – after the Tobie Norris and just ahead of the Green Man. Anyone taller than Frodo will have to stoop to get through the front door, and anyone paunchier than Kate Moss will probably have to breathe in as well. For big-boned chaps like myself, the entering this pub leaves you feeling very deserving of a swift half.

Inside it’s almost a cliché of a cosy small town pub. Low ceilings with dark exposed beams. A roaring wood-burning stove displays complete ignorance to the changing of the seasons, leaving anyone brave enough to within 50ft. of it with half a face that would definitely be classed as ‘medium rare’.

Both big bay windows have tables squeezed into them and there are little steps and bends and the whole thing feels almost suffocatingly snug.

Drink-wise everything seems to be pretty much in order. A tiny bar serves a consistent selection of guest ales, including Jennings which is rarely seen outside of Cumbria.

Sadly though, I have grown to really dislike everything else about this pub.

For whatever reason this place has veered away from being a classic pub that does a bit of decent food, to being a place that is focused on clientele that are going to eat, and looking down on those people that just come in for a pint and pack of ready salted. Call me a heathen, but places that prioritise things accordingly are called restaurants. In some blind up-its-own-arsery, the Kings Head clings firmly to the idea of being a pub in a pub building, whilst simultaneously doing everything it can to actually be a restaurant.

All but two tables inside have permanent ‘Reserved for Dining’ cards, the result being that if more than six people arrive to have a pint at the same time you can end up looking like a vertical game of pick-up sticks having a squeezed and apologetic pint rubbing against the bar.

The creaking veneer of hastily-applied customer service sneer on the face of the staff breaks the second you reply, “yes please, a bag of crisps” when they ask if you will be eating this evening. There’s not a lot of margin on a bag of crisps, and nobody tips the person that serves them their three course dinner of crisps, scratchings and bacon fries.

Perhaps most criminally, this Lidl-does-fine-dining atmosphere is lapped up by a depressing bunch of beige coloured Hyacinth Buckets and their wash using partners, all of whom have sad little conversations at the end of their meals as they count out the exact amount of money they owe because, despite dressing like a fantastic pub but acting like a tired hotel restaurant, the Kings Head, Stamford does not take card.

And the cherry on the cake? Above the gents urinal is a poster with loads of those tossbag fridge magnet sayings like “I like to cook with wine. Sometimes I even put it in the food.” I’ll get my coat… 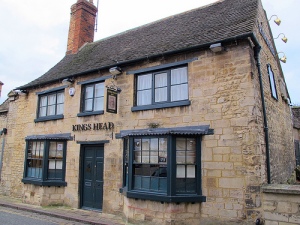 4 responses to “The Kings Head (Stamford)”