The inexorable onslaught of the Kindle, George Osbournes relentless vendetta against all public services and the rise of dubious fact emporium ‘Wikipedia’ has resulted in a steep decline in visits to libraries. Despite this I’m sure the majority of us can recall the experience of being utterly confounded by the dewy decimal system, the little yellow library card, the books in protective PVC covers and that impenetrable air of serene quiet presided over by cardigan festooned guardians of knowledge. It is this final memory you need to trawl for most deeply and once you have it held most vividly in your mind imagine the sheer horror of walking through a door not into a library but into a pub and discovering that shroud of murmuring voices.

The Carpenters Arms is quite clearly someone’s pet project; a  labour of love most likely borne from years of daydreaming about becoming landlord of a quaint little nook somewhere quiet. The problem is that two streets away from Brick Lane in between Whitechapel and Bethnal Green is not a quiet nook, it’s a bustling hive of trendy wannabes, east enders and young professionals only very few of whom really want a sedate wine bar which feels like it belongs either in Kensington or Provence.

It’s hard really to pinpoint what causes the conversation stifling atmosphere. It could be the lack of any real distance between seats or the fact that the seats themselves are uncomfortable. It could be over officious way in which it seems to have been decorated; with a bit too much care and detail it’s almost OCD and sucks out the charm and warmth. It could be the fact that with the wine list covering two whole blackboards and the breadsticks it all feels a bit French. Primarily I think it’s that the moment you walk in you’re acutely aware that this space belongs to someone and that person isn’t you. This is not a public house, it’s not a pub, it’s someone’s sanctum, their library; and as a result no one wants to shatter the calm.

I don’t feel that this actually is a bad pub. It’s just not right for where it is or what it ought to be. Yes there are couple of ales on tap and yes it looks like a pub but it’s lost its soul. As George Osbourne, Amazon and Jimmy Wales have all but consigned the public library to the scrapheap of history I fear that the current landlords will see this little place added to the list of pubs which just got it wrong and couldn’t cut it anymore. It would do well to learn from nearby successes such as The Well and Bucket or The Florists Arms and incidentally I think that’s where you should go drinking too. 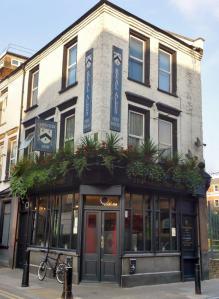